The Pyramids of Egypt
Egypt is one of the most ancient countries that has pyramids , starting from The Old Kingdom, the pyramids acted as royal tombs of Kings and Queens which started from the 3rd dynasty up-to the 6th one . The meaning of “pyramid”in the Greek language is a piece of cake .

The evolution of the Pyramids of Egypt of the ancient Egyptians

The 3rd dynasy pyramid called Mastaba, mastaba is a step of stone then called the step pyramid Afew steps .The 4th dynasty pyramids known as the golden age of the Egyptian architecture, the bent pyramid and the red pyramid (the first complete pyramid) at Dahshour, Giza pyramids such as Cheops, Chephren and Mykrinus (the most famous pyramids), then continued….

By the 5th dynasty pharaohs started writing text on the internal wall of the pyramid in the pyramid of Unas, later on the carvings and scenes during the 6th dynasty .

The shapes and the sizes of the pyramids of Egypt differ from one to another from stepped to bent to complete .

The Pharaohs had put their mummies after being mummiffied, then the artifactes used in their afterlife like beds, combs, cosmetics, mummified food, funeral furniture etc ……….

We first put the mummy inside the coffin one or more layers .

Most of pyramids stone is limestone and the outer surface is of a better quality of limestone, rarely of granite blocks that come all the way from Aswan . 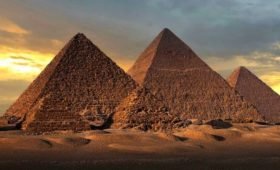 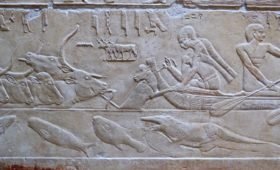